Well, the Jack Daniel’s that has been languishing in my pantry since my Drunken Prawn post,  has found its way into another astonishing dish! When I saw the recipe in Donna Hay Magazine (issue #84), I was so excited!  Yeah, another delicious way to use up the bourbon!  I have since made these sweet, fragrant nuts a few times and they have caused quite a ruckus in our house. The recipe is so quick and easy, it has become our favourite Friday night snack. Seriously folks, bourbon, rosemary and honey are a flavour combination beyond reason. I have been trying to figure out the meaning of “umami”, and I think with this recipe,  I have finally got it! It just doesn’t get any better!

Another ingredient I have recently become smitten with, is rosemary.  It seems to be finding its way into so many of my creations these days.  So much so,  that being tired of paying dearly for a few sprigs of the heavenly herb, I finally  bought my own plant last week. Now this is a story in itself!  I didn’t read the label very carefully, only to discover that the thing will grow to be 6 feet tall! Where the heck can I plant this giant?  I really have no idea, but I don’t care, because now I will have no end of rosemary at my fingertips… for me and my neighbours!  I may even start a Rosemary series on this blog!

I am bringing a huge bowl of my tasty nut mix over to Angie’s Fiesta Friday this week.  I think the gang will love the recipe!   Thanks so much to our lovely co-hosts; Julie at Hostess at Heart, and Ashley at Too Zesty. 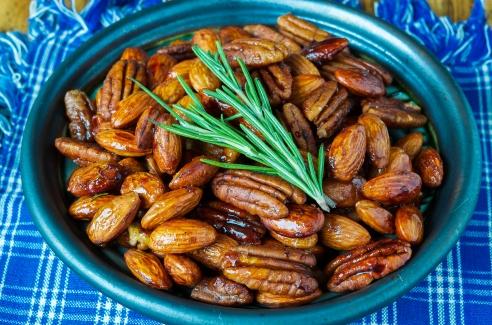 I think this is umami!

Place the pecans, almonds, honey, bourbon, olive oil, salt and rosemary in a bowl and toss to combine. Spread the mixture on a large baking sheet lined with parchment paper. Bake, turning halfway for 20 minutes, or until dark golden and the bourbon has evaporated.

You can keep the nut mix in an airtight container for up to one week.

You can try keeping them in an airtight container for a week, but they will be devoured before then!