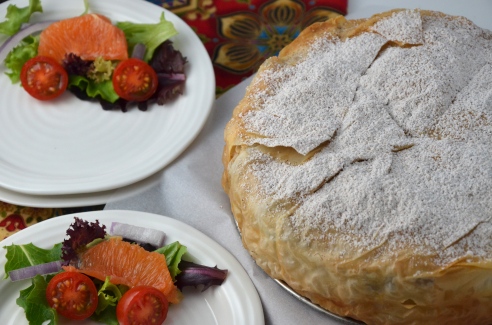 I think that many cultures have a tradition of meat pies, or pastries filled with meat, but my new found favourite is this savory and sweet chicken phyllo pie from Morocco. I love the buttery crunch of the phyllo pastry and the way that Moroccans add sweetness to this dish by combining the meat with dried fruit such as apricots or raisins, and then dusting the top of the pie with icing sugar and cinnamon. The result is a rich, exotic dish with a surprising burst of sweetness when our taste buds meet the dried apricots and the dusting of sugar that tops the pie.

I recently took a couple of Moroccan cooking classes with Chef Glenys Morgan at my favourite kitchen store, Posh Pantry. I was so excited to finally learn how to make this pie and couldn’t wait to come home and recreate it in my kitchen. This recipe is deceptively simple to make and it becomes the showpiece of your dinner table. The night before, I made the chicken mixture, to just before the eggs and the herbs are added. When I came home from work the next day, I finished off the recipe and served it warm from the oven with a fresh, colourful salad. I made the pie in an 8 inch springform pan, but traditionally it is made free form. The cook just makes a pinwheel shape with the pastry and piles the chicken mixture in the middle and then folds the pastry around the meat to create a round pie. If you want to, you can also make individual pies as you would in Spanakopita. Wouldn’t that be a wonderful treat to find in your lunch or to take to a picnic?

This is Chef Glenys Morgan’s recipe. Thanks Glenys!

I am really excited to be bringing this pie over to Angie’s Fiesta Friday! I know they are going to enjoy it and I can’t wait to show off what I learned in class! Honestly there is nothing like taking a cooking class to get the creative juices flowing and to get you excited about cooking something new for your family, friends and blogging buddies at a wacky Friday night blog party! Bon appétit everyone!

4 – 6 sheets phyllo, cut in half lengthwise

Heat the oil in a large skillet and add the chicken, onion and spices. Stir to brown lightly. Add the chicken stock and cover, simmering until tender.

Remove the chicken and reduce any excess liquid.

Remove the chicken from the bone and shred it.

Whisk the egg into the onion mixture and stir to cook slightly. Remove from heat and add the shredded chicken, cilantro and parsley. Mince the apricots and add to the mixture.

Using an 8 inch springform pan or 9 inch pie plate, lay 2 pieces of phyllo across each other to form a cross. Brush generously with butter. Continue adding sheets of pastry in a pinwheel shape until the circle is formed. Butter generously as each sheet of phyllo is added. (To stop the phyllo pastry from becoming brittle while you are working with it, keep it covered with a damp tea towel.)

Sprinkle ½ the almonds on the bottom of the pinwheel. Mound the chicken mixture in the centre and dust with the remaining almonds.

Bake at 350° until golden brown. (about 35 minutes) If excess butter is draining onto the pan, blot with paper towels to prevent burning.

Cool 15 minutes. Place icing sugar and cinnamon in a mesh strainer and dust the top of the pie generously.

Cut into wedges and serve. 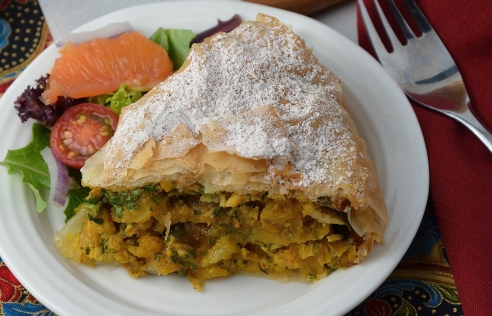